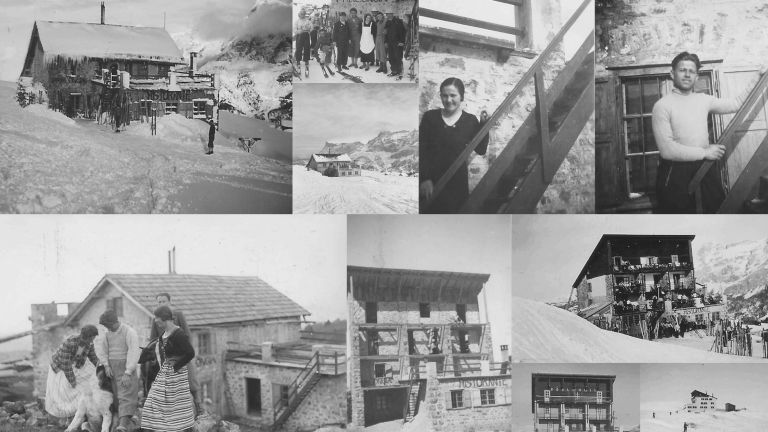 Alpine Hut Pralongià in Alta Badia features long hospitality traditions and is now run by the third generation of the Pescollderungg-Niederkofler family. Its history began in the late 20s when the Pescollderungg family owned one of the first hotels in Alta Badia - the Hotel Dolomiti in La Villa. Three of the 17 children, Konrad, Siegfried and Peter, often accompanied the Hotel's guests on various ski tours. Already at that time "Prà lunc" (the long meadows) were one of the brothers' favourite sites because of the stunning beauty of the surrounding landscapes. Willing to offer a better service to their clients, they decided in 1932 to build on the meadows of Pralongià a small mountain hut with a couple of rooms for overnight stay and a small dining room (during the first years all food was brought up from the Dolomiti Hotel). After the Second World War Konrad remained alone to run the mountain hut, but faced the challenge with the utmost determination and commitment. The first chairlift reached Pralongià in 1959. And in 1977 was erected the nearby chapel, dedicated to St. Antonio, in memory of Konrad's wife Antonia, who died a couple of years earlier.

The construction of the new building next to the old one in 1975 and its opening in the following year marked a new milestone in the Hut's history. The new Mountain Hut was run, with passion and enthusiasm, by the daughter of Konrad and Antonia, Erica Pescollderungg who in her turn gave birth to 5 children. Nowadays, her son Dieter Niederkofler and his family manage the Alpine Hut Pralongià together with mother Erica and continue to improve it, following the grandfather's idea to offer to the guests the best possible service. But despite all changes, the Alpine Hut Pralongià in Alta Badia remains undoubtedly a place where you can enjoy the most authentic mountain experience and flavours.